Millions of downloads and reviews show that Royal Revolt is always a classic entertainment game of all time. Let’s collaborate and discuss with your friends by creating an alliance. Royal Revolt is free to download and play, however some items in the game can be bought in real money.

What is Royal Revolt? 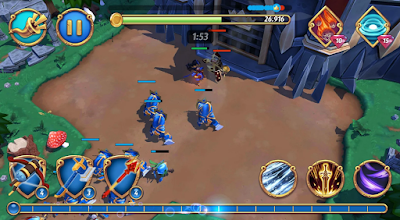 This is an award winning action/strategy game in which you have to lead your troops into battle and defend your throne from rival players around the globe. To become a real king, you must develop your kingdom, perfect your defense, and create powerful alliances. If you do not want to use the features of the in-app purchases, please turn off it in your device's settings.
What are the Features of Royal Revolt?

• Improved defense with well-shielded traps: "Humorous Box"
• Easter festivities begin in early April
• There is added community requests such as the possibility of changing the name in the game and the national flag of the Alliance.
• Participate in regular events such as "Alliance War" in which you work in the same team

Why should you try Royal Revolt?

Slogan: Royal Revolt can be known as the preferable action-packed game which will entertain you with its many features.