Modern Command is a great combination between tower defense and strategy. Known as the latest game of Chillingo, Modern Command makes players all over the world satisfied with a compelling backstory.

Player’s tasks are to build a world-class global protective force to battle against armies of tyrannous villains, eliminate the terrorist threat and conquer glorious 3D battlefields throughout the world.

What are the great features of Modern Command? 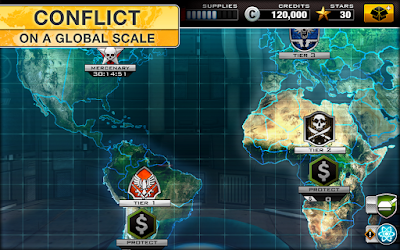 To fulfill your duties, you have to research new defenses, deploy wise strategies for global security.
One thing that makes it stand out with others tower defense styled games is you don’t build towers on the way to your base; all towers are located in your base. When enemies approach, you have to pick a tower and tap where you want it to attack.

The most important thing makes Modern Command more difficult than the remains is that you have to control each and every tower. The mission will be nearly impossible when large waves of enemy arrive at your base.

Although the front Price is stated as Free, the amount you should pay for In-app purchases is in the range of $0.99 and $1.99

To buy it, you only Download Modern Command for free on Google Play or Apple App Store.

Why should you buy it?

Modern Command is one of the most attractive tower defense games. It keeps you busy with a series of fast-paced gameplay. With the stunning graphics and great sound design, players can really be involved in the game.