A movie tie-in game is what everybody love, especially ones that stick to your childhood memories like Power Ranger. Being a superhero and controlling those power are such a huge thing to many kids and adults as well.

Power Rangers: Legacy Wars is a multiplayer game on mobile. The original storyline of the TV show is maintained: Rita Repulsa, the space witch, keeps creating ferocious monsters and Ranger clones’ programs. Your mission is to build the best warriors to defeat Rita and save Morphin Grid. 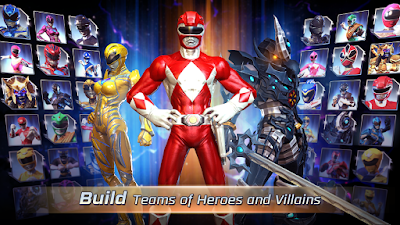 What are great features of Power Rangers: Legacy Wars?

- Team up with other users.
- Battle against real players in real-time.
- Collect new Rangers and more than 40 warriors across the Power Ranger multiverse.
- Stunning visuals and animations.
- Able to challenge top players from around the world
How does it work?

A team with 3 members including one leader character and two support characters. Players have a power meter that goes from 1 to 10 and must determine from one of three types of moves: Strike, Breaker, or Defense. Keep in mind the simple rule that Strike Beats Breaker, which defeats Defense, which blocks other Strikes. Furthermore, you are able to replay to learn strategies from other members and top players.

Power Ranger: Legacy Wars is now available for both iOS and Android platforms. Pick up the game for free at Apple Store and Google Play.

Why should you buy it?

Besides the simplicity the game provides and the design of 3D character models that blows you away, the attraction of Power Ranger is undeniable. Being the superhero in your dream and defeating all the evil forces to save the world, what’s better than this?